The ecological gardener is more than just an outside cleaner keeping the garden tidy by cutting the grass, weeding and trimming shrubs and hedges. The tasks involve a more sensitive,  observational, thinking and caring approach. The two main thoughts should be a) What can we do to involve and benefit nature in the planting and b) How can we keep the display looking its best throughout the year with minimal interference.

Unfortunately all human maintenance activity causes disturbance and stress to the biota and we must keep this in mind when trying to strike a balance of acceptable and necessary operations. For example we allow previous seasons growth to remain standing for as long as possible benefiting from the structure ( relationship between stem and leaf) and seed heads. This also provides habitat (food and shelter) for wildlife . Unlike the natural environment just before the onset of fresh growth, for the sake of future appearance, we cut down any remaining  skeletal vegetation. This results in some loss of recyclable vegetation (unless composted and returned at a letter date) and disturbance and death  of an albeit lower percentage of existing wildlife.

January-March: Much of the remaining standing dead stems and seed heads of deciduous flowering perennials and ornamental grasses from the previous season can be cut back and removed with any areas of heavier build up of  unsightly decaying vegetation. The aim is to allow some decaying vegetation to remain to continue returning nutrients to the soil through detrivore action and protect the soil level crowns of herbaceous perennials whilst providing us a greater unhindered view of early spring flowering bulbs. Decaying vegetation also  reduces areas of exposed soil which would allow weed  seeds to germinate.

Early March- mid April:  This is the main point of the year for weeding, although some weeding may have been done during the cutting back period if soil conditions (not too wet to or too frozen ground) allowed. This will also identify areas of self sown seedlings which can be carefully thinned  and relocated to any obvious bare patches created from weeding. Any vigorously growing  herbaceous perennials can be lifted at this point, divided, replanted  and if suitable also used to  fill gaps elsewhere. Any species evaluated as competitively too vigorous may need to be removed from the planting. Natural and semi-natural habitats can be seen as being in a stable steady state, never changing from year to year, but they are constantly in flux with gradually changes not immediately appreciable to the casual observer. These changes are much more noticeable in the cultivated garden border but through diversity and density in planting these changes are more manageable.

Mid April-Mid June: Some additional weeding may be required as herbaceous perennials green up and close ranks which will suppress further heavy weed growth. However interference which can damage new emerging growth should be kept to a minimum. A greater tolerance of weeds that have escaped earlier weeding is allowed, only  focusing on any large and noticeable out of place ones. The decomposition of the previous seasons growth will have returned organic matter (nutrients) to the soil and this will negate the need for the unnecessary cost of man made fertilisers. Pesticides and fungicides will also not be needed as the density and the intermingled species richness will make slight imperfections less noticeable as they are in the natural habitat.   Pest will further be regulated by natural predators.

We must cultivate a greater tolerance and acceptance of minor imperfections. We observe the appearance of plants as individuals and  as a species in association with their neighbours  and how they change at different periods  in their life cycle, often related to the location’s  soil and climatic conditions, vegetative spreading habits and  the  spontaneity of self seeding. This guides us to a deeper understanding of how plants and wildlife interact and how we may improve the planting in the following year by some careful editing.

Mid June- End October: Very minimal maintenance is needed during this period.  Plant species which have  finish flowering and set seed can now have their seeds  harvested on dry days, cleaned and packaged ready for use in other locations. Large species rich meadow style plantings may be cut down in August to reduce the vigour of more invasive dominating species and allow less competitive but desirable species to flourish.

November- December: Many perennials including grasses will retain good winter structure in their stems and seed heads looking especially good in a wintery hoar frost. Enjoy the intricate detail of of cob webs, seed heads and frozen leaves and stems providing an enchanting photo opportunity.

January - March : Back to top, spring is just around the corner? 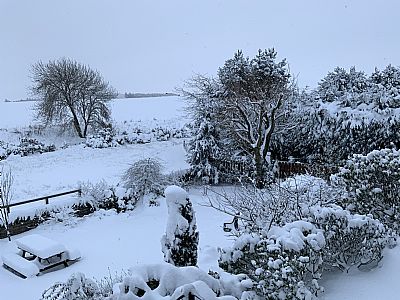