Although there are sceptics and alarmists, science and observational evidence proves that climate change, the warming of the earths surface through greenhouse gas emissions, is happening at an increasingly faster pace today than thousands, even millions of years ago. Natural factors, such as the changing of the earths orbit around the sun, do contribute to  global warming but it is man's  activities, such as the combustion of fossil fuels gas, oil and coal to produce energy. that are accelerating the  process much  faster and at greater intensity than the natural world can adapt to; resulting in species and habitat loss.  World governments are acting, perhaps too slowly, for change in human practices to reduce greenhouse gas emissions and safeguard the balance of our natural resources: The biodiversity for future generations.

At a personal level many of us play our part through individual behaviour such as recycling waste, purchasing electric cars etc. Our social attitude towards nature and the environment is changing in the garden also, but we can do more. In the past our traditional gardening practices  although appreciative of nature, where more geared towards controlling and keeping nature in order. Neat colourful rows or groups of plants showing perfectly formed flowers, the whole scene created being brought together by a tightly mown lush green lawn with clean cut edges. 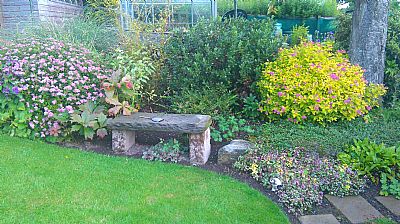 In the last couple of thousand years we have gradually distanced ourselves from nature through becoming more civilised  and our recent technological  advancements have started to harm in a short period the balance that nature has taken millions of years to achieve.  Today we are becoming more aware that our advancements and improvements are all too often harming the resilient balance nature has taken millions of years to evolve. By accepting that we are not disconnected from nature but have a strong connection with it, being part of nature,we realise we have a moral duty to make time to contribute to rectify this balance and re- embrace our ties with nature.

At National and international level, technological and large nature based solutions such as conserving and restoring carbon sinks such as peat lands are being implemented but at a local level we gardeners can do our bit to help  mitigate and adapt to climate change. Natural style planting is a nature based garden and landscape solution providing nice places that cater for our health and well being in study, work, play, relaxation and socialising. At  a deeper level it provides habitats for biodiversity by supporting healthier soils, nutrient cycling and photosynthesis which in turn regulate cleaner air, all important carbon storage, flood management, erosion control, water purification, pollination , disease and pest control. 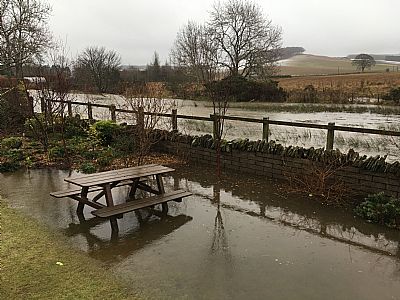 Over the last 20 years my garden is flooding much more frequently. The planting mix here must be tolerant of periodic flooding.

Lots of work has been done in the USA and continental Europe on planting combinations and seed  mixes to create natural style plantings. Designers in Germany, Holland, Austria and Switzerland have all developed  planting mixes predominantly suited to their inherent continental climate, mainly hot  dry summers with cold winters.  Planting combinations and seed mixes have also been developed in England often using steppe inspired plantings to  counter drought conditions. Designers such as Noel Kingsbury, Nigel Dunnett and James Hitchmough in England, Piet Oudolf and Cassian  Schmidt in Europe and  Roy Diblik in the USA have published highly informative, inspirationally detailed guides to their work. In Scotland we must learn from their accomplishments and adapt their schemes to our needs making a natural planting style suited to our climate and soils. 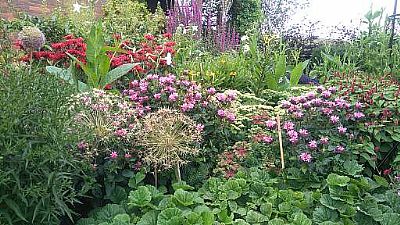 Species rich dense planting benefits both us & our wildlife.

Scotland has a maritime climate which tends to be a mix of warm to cool often rainy days in the summer followed by milder and wetter winters. Our soils tend to have a neutral to slightly acidic pH and in urban and agricultural areas generally quite fertile and unless we garden nearer a coastal location we are, at the moment less prone to prolonged summer droughts. The growing season is shorter than further south and our days although not dull are certainly more overcast. The Scottish climate does allow us to grow a diverse range of species  which often  flower for longer periods as they are less likely to shrivel up in strong sunshine.

Although  plant species, numbers and percentages and planting styles vary between designers the commonality in natural style planting is a species rich diversity and density with a relaxation on the stresses and disturbances caused by regular maintenance practices and a greater tolerance towards minor imperfections within the planting as a whole. The aim is to increase biodiversity of plants which in turn increases the biodiversity of wildlife; insects (invertebrates) animals and birds which if left relatively free from human interference will both  remain "stable" through interactions of a ‘ semi- natural’ food chain. Ecologically no habitat, natural or semi-natural is truly stable, there are always  gradual changes occurring through time. Most habitats , in the UK are semi-natural, in that man has had an impact on its current state at some point in time,  as opposed to natural which has had no human influence at all. In the garden and urban landscape setting changes in species composition is more noticeable and to avoid dominance of one or two plant species over the rest minimal human interference in the form of editing is required. Natural style Maintenance.

Invertebrates or insects can be  categorised in five functional groups contributing to  the food chain. At the lower end are the detrivores such as wood lice, spring tails and ground beetles which breakdown decaying organic matter into a nutritional form useable by plants. Predators such as ladybirds, spiders and wasps prey on foliage eating caterpillars, thrips and aphids, with  omnivores such as earwigs consuming both. Adult bees, butterfly’s and hover flies pollinate flowers contributing to formation and germination of  seeds into species genetically adapted to changing soils and climate.

Planting for wildlife is continuing to increase in popularity particularly towards bee friendly plants to mitigate their global decline through environmentally negative practices such as weed killer applications. Numerous publications and organisations recommend lists of plants to encourage wildlife (insects, birds, animals) into our gardens. I find when comparing  these recommended plants lists that often more inconsistencies and contradictions are highlighted than agreements. This suggests that recommendations are largely based on anecdotal or general  observation rather than scientific based trials and evidence. More scientific objective research is clearly needed for accurate information.

What constitutes a wildlife friendly planting? Some state that UK natives (plants that persisted or arrived naturally without human influence since the end of the last ice age about 10,000 years ago) are best for native wildlife; having evolved together. There is evidence suggesting native plants attract a significantly higher diversity of  native insects. There is however no concrete evidence of a difference in overall insect numbers visiting native and non native plants.  The insects, birds and animals we share our environment  with are not too concerned with garden boundaries or a plants origin. Their priorities are food, water, shelter, building materials and safety.

Non - natives can be classified as near natives, those from  the Northern Hemisphere such as North America, Europe and much of Asia and exotics those from the Southern Hemisphere such as Australasia, Africa and `South America. Rough estimates suggest that there is a decline of around  10% of insects visiting near natives and 20% decline in insects visiting exotics.The  benefit of adding near natives and exotics for us is that they  extend our season of planting interest and variety and for wildlife an extended source of food etc.

There is little doubt that a planting rich in plant diversity and density of natives and non natives (near natives and exotics) with minimal interference from human practices such as maintenance operations which disturb and stress natural wildlife interactions attracts more insect numbers as well as leading  to greater resilience of the planting to  pests, diseases, and weed infestations. This increase in biodiversity reduces the impact of climate change.

We must not forget that a truly nature rich, bio-diverse habit also embraces death and decay, not only the detrivores such as wood lice but also insects and birds that make homes in decaying wood, fungi, lichens and bryophytes (mosses and liverworts) all of which are integral working parts of the food chain. A dead tree can be a seen as unsightly and a safety hazard but it’ can be cut to stump level and its branches piled  to provide an ongoing  habitats for those often less considered organisms.

This is the foundation of thinking behind my planting strategy. A long lasting attractive display of plants (trees, shrubs, climbers, colourful flowering herbaceous perennials, grasses and ferns )not only based on colour, texture, structure, shape and size for our instant visual benefit but also  for shelter, intimacy and privacy. Long lived perennials (ornamental grasses, flowering perennials, shrubs and trees form the structural themed matrix planting. They are augmented by fillers (bulbs, annuals, biennials and short lived perennials) which add diversity, density, interest and weight to the theme as well as ensuring a quick successful establishment of the display/habitat intended. I tend to use fillers in seed form, as this method provides a larger quantity of plants, cheaply to contribute to the planting scheme through out the year. Death and decay is however not  unwelcome  but embraced as part of the display.

Ornamental grasses are extremely popular in continental Europe, the USA and England. They are slow to be widely accepted in Scotland but their use in a planting scheme is fundamental to creating bio diverse habitats.Mixing ornamental grasses in with a planting of  flowering herbaceous perennials does more than provide aesthetic contrast, balance  and support for plants but provides shelter, protection and homes and building materials  for wildlife especially small mammals, spiders and birds all integral links in the food chain. Spent seed heads of  tall ornamental grass and tall forb combinations  allowed to remain over winter provide  extended contrasting visual  interest  as well as habitat for wildlife. 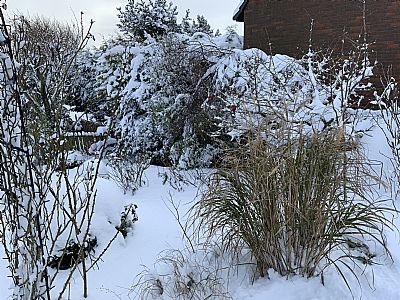 In the depths of winter Miscanthus grass providing aesthetic structure as well as a welcome habitat for wildlife.

Grasses in the form of lawn areas are ecologically not ‘wildlife friendly’ as they are constantly disturbed by operations such as mowing and lawn care treatments. They are however a necessary evil for the benefit of humans for relaxation and play areas. I prefer to perceive lawns  as designated utility areas for humans, to prevent them disturbing the flora and fauna around them. Lawns also allow drain rain water away and are visually gentler on the eye than the over use of concrete and gravel so common today in the name of neat labour saving strategies . ?